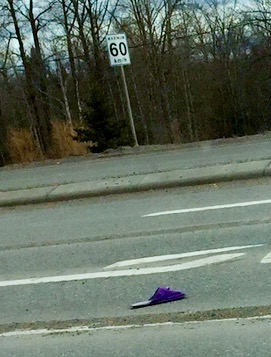 Purple is the colour of royalty and when I saw one purple slipper in the middle of a busy seven lane highway intersection, I was pretty sure there was some princess  wandering around looking for her lost slipper.

I doesn’t answer the question as to how it got here and certainly there wasn’t a ball in the middle of the highway.  Perhaps it fell from her carriage?

The things you see on or by the side of the highway all have a story and all came from somewhere else.  Yesterday I saw two wooden chairs upended by the side of the road, still stacked together like they were tucked in to be moved with the matching dining room table, but tumbled from the back of the truck breaking up with the set. Maybe they wanted a divorce.  Maybe they wanted out of the tight four chairs and table relationship. They are on their own now.

Not all things that end on or by the side of the highway jump from moving vehicles in an attempt to escape.  I was driving a pickup with a big bale-package of pink fibreglass insulation in the back and as I hit the gas to climb the steep hill out of Telkwa the huge bouncy bale did just that.  It bounced right out and rolled down the hill. I turned around at the top and went back to get it and it had vanished in the couple of minutes it took me zip back for it.  Someone had scooped it up with a finder’s keeper’s attitude and  absconded with it.  I was pretty choked.

And sometimes there’s motive and intention behind the story of treasures hiding in the long grass on the edges of highways.  Hmmmm…… like the story of the couple who were driving a beautiful vehicle while towing an incredibly ratty, baling-wire-held-together utility trailer  through a mountain pass. It was free.  That’s the only rationale behind such an adventure with a trailer like that.  “Keep an eye on the wheels; watch it in your mirror. The thing is dog-tracking” he tells her as she leans forward in the passenger seat with eyes glued to the side mirror.  She shrieks “the thing is going sideways it’s gonna flip!”

He pulls over and they discover the axle is sitting on the road in three pieces and the trailer is off to the side in a few more pieces in a high mountain pass without a town for miles and miles.  Nice steep banks down to treed ravines.   He rips the plates off the trailer and together they push it to its death over the edge of the road watching it tumble-down.  Oh well. (Yes, I still have the plates.)

Back to the purple slipper though, and I wonder if it was discarded when the dance was over and the mate to it was tossed out down the road to be done with the evening, or if it was accidentally dropped at midnight and is waiting for the Prince to caress the fuzziness of it and slip it back on the Princess’s foot.

He’d better be quick. The intersection is a really busy one.