Much like Jasmine crashed in her nest, Friday night found me nodding off pretty early as I curled up on the couch.  A new job will do that to ya.

Kinda like being picked up dropped into a foreign country, a new job is meeting the locals and learning a whole new language.  All those acronyms we are so fond of using these days are still in play but mean something totally different from before. A new language for a new purpose. And learning the new purpose; the “what” of the job is exhilarating.  I don’t say it’s overwhelming, I guess, because I’ve learned my share of new jobs and know it’s ok to ask questions and ok to not know everything.  Experience does bring with me some confidence in my abilities as well as a passionate motivation to learn new things.

So that’s where I was this week. Introductions, renting covered parking (hahaha no brushing snow this winter!), and change of wardrobe again.

It reminds me that only a year ago I was, as I call it “the invisible woman in the pink flowered shirt”.

With the contract ending and our team dispersing the dynamics changed not with a gentle shift, but more like a glacier calving and I was one of the pieces floating away in the wash.  I sat at a thank you dinner as an invisible woman and it amazed me since I thought my new pink shirt was kind of ….well… noticeable.

What was noticeable with the changing atmosphere was the need to be a 40-year-old male in flat fronted khakis and a checkered shirt to fit the model of the new team. I wasn’t that so I became invisible.

What I learned from that was to make sure I continue to value my teams  and colleagues until the end and to make sure it is not “to the bitter end”; to let people move on with dignity and pride in what they have done.

But I digress….. that was a year ago.

Transforming my world with some new paint (those old uniform shirts still coming in handy)  and spending time with Jasmine. Time to do some writing and just breathe.

Time to spend with my new friend Griz and others.

With the changing of the seasons and all things new in the springtime, I decided to look for something else to do.  “Why don’t you just retire? Why would you want to go back to work?” A common refrain, but only from those who seemingly enough, are retired. I’m not ready for that yet. I still want to be a part of something; doing something; providing some value. Too much type A in my personality I guess? 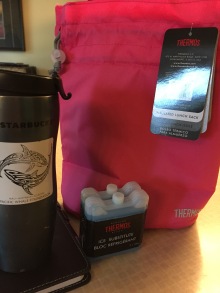 So “Yes” to a job offer and as Mark pointed out it is good luck to start a new job with a new lunch bag.  To prove that bright pink does not render one invisible, I step out with another try with a colour I love.

It’s also good to take along an old friend, stickers and all for comfort that has been by my side through ups
and downs.

And that’s kind of the story of moving on to new jobs and new weeks.The rest of the story is that it feels good to meet new people, to delightfully run into people I worked with before, to have a new role that I choose to be in. .

and…….the tradition……selfie in new work bathroom.  Can’t buy that kind of classy, now can ya? It was a good week.