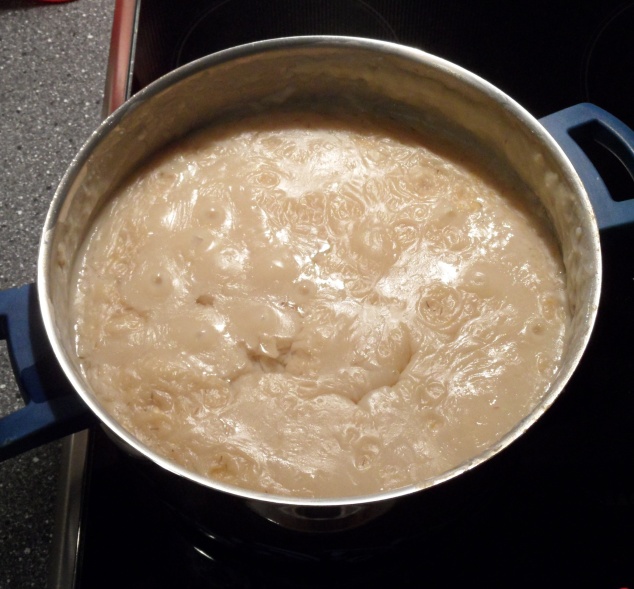 The smell of potato soup wafts up from the stove as I hold the seven week old baby girl tucked to my chest, rocking back and forth to try to get her to stop crying. And shivering.  She is shivering. With my free arm, I stir and stir and stir the soup with the big broken metal spoon that I found in the cutlery drawer with a few stray spoons and forks and crumbs.  The spoon grates against the pot with each pass through the thin soup. I can’t let it burn; it’s all there is to eat in the house.

I hadn’t thought of the family for years but they came rushing back to me with all the desperation and fear and hopelessness from so long ago.  With a thick, creamy soup simmering on my stove; bacon, onions, potatoes, rich and creamy, I caught a memory as I lifted the lid to check and stir.

My parents were free and easy with offering up  my babysitting services to it seemed whomever they met, and I was set up to babysit the family of 5 kids including the newborn for the people who lived down the road in the teacherage. We all called it the teacherage but it wasn’t only for teachers in the small school.  The house that was rented out to this family from a social service agency in our very rural area and my parents thought it would be a “neighbourly” thing to do having me babysit to help out the family.

I walked the half mile down to the house and met the family in the early afternoon.  The husband was drunk. A towering man in unlaced workbooks, a grey grizzle of beard and someone I already knew I wasn’t going to let drive me home. No benefit of the doubt to be happening here.  Sloppy, give me the creeps drunk, as he smilingly leered at me in one moment and the next yelled for his wife to get her ass out to the truck now.

Combing her hair with one hand as she shoved the baby at me with the other, she said the baby would sleep but if she woke up there was a bottle in the fridge.  To give her half when she woke up and half later. I asked when later was and she said, whenever she cries. The baby was bundled up sleeping in a faded blue blanket and I marvelled to myself that I could hardly feel the weight of her.

I asked what she wanted me to feed the other kids and she said “oh, they will be fine until we get home.” With the husband sitting in the truck honking the horn in longer and longer bursts, the wife took off scuttle-running out the door saying they are just going in to town to buy groceries and would be home in time to cook supper; we’ll be back by 4 or 5 pm at the latest.

Besides the baby, there were the three little boys aged 3, 4 and 5 and the big sister Meggie.  Meggie was 11 years old at the time; a large, heavy, doughy, Down’s Syndrome girl with an alternating shy smile, and a dive right in for your attention manner bowling the little guys over. The wife said not to let Meggie hold the baby. I was inundated with grubby little boy hands pulling my sleeves to “come see my fort, come play with me”and Meggie hugging me as I held the bundle of blanketed baby.

The house was furnished with mattresses on the floor in the two bedrooms, a broken down Davenport in the living room in a perpetually open position with broken hinges, and a table with two chairs in the kitchen.The house had a smell; the kids were dirty and the dog was climbing over everyone in the crush of meeting me.

I opened the fridge to find one small bottle for the baby.  That’s all there was for her. There was a partial carton of milk and a few onions and potatoes and 2 bottles of beer.  That’s what was in the fridge. I opened cupboards and found a half empty box of corn flakes and a bag of bread with four slices in it and a bottle of rye whiskey with a skim of liquid on the bottom

The baby woke up and cried with a feeble little cry I’d never heard before.  I had spent a lot of time babysitting as my main source of teenage income and had never heard a baby cry like that.  It reminded me of a tiny kitten. And her chin kept quivering.  Checking her for diaper change, I realized that the wife had not told me where the diapers were kept and I asked the kids about it. They pointed me to a shelf with an empty Pamper bag. There were no diapers, but the diaper was dry so I taped it back on.  I warmed the bottle in a pan of water and tried to feed the baby.  She wouldn’t drink at all.  I couldn’t get her to take her bottle.  I kept trying; rocking her and walking with a trail of noisy little boys and Meggie following me from room to room. With no TV, I was the entertainment.

The the baby fell asleep. It was weird that her chin kept quivering like it did.  And  I used up all my songs and chatter, told stories and coloured with the handful of broken crayons the kids brought me.  Draw me a picture.

At dinner time the kids whined that they were hungry and I said that their parents would be home soon. At 6pm I called my mom and said, “the parents aren’t home and they said they would be back by 5.  There’s no food and the kids are hungry.” I told her about the fridge and she said, “well, make them some potato soup, if that’s all there is.” So I did. Thin potato soup. And they loved it! As they slurped the soup out of cups and bowls, I kept trying to feed the baby and she wouldn’t drink at all.  She just sort of laid in my arms like a floppy doll. I was worried because she had a funny colour and just seemed weird compared to other babies I had looked after, and she didn’t even pee.  I knew something wasn’t right.

I told the kids to show me where they slept, hoping to get them to bed early and the boys showed me their mattresses in the second bedroom. Meggie said she slept in the living room.  At that the boys clambered over each other to tell me about it and said “yeah, Daddy puts his weenie in Meggie so she has to sleep there with him.  We seen him do it and he yelled at us to get back in our beds. He sleeps on top of her.”  This said with much giggling and talking over each other to describe Daddy’s hairy weenie. Meggie, not wanting to be outdone for attention said ” He says it’s just humping like the dogs do.”

I called my parents at 7:00 to tell them I needed help.  I talked to Dad and explained about the baby and said there was some creepy stuff going on in this house and I wanted out.  He drove down and took one look at the baby and said “the little thing is barely alive. I’m calling the police to get some help here”.  With the parents gone now for over 7 hours and no food in the house; no way to get in touch with them and the baby barely responding, he made the calls.

The police came with social services and rushed the baby to the hospital. I don’t know what happened to her after that. I told them about what the kids said about sleeping arrangements.  I showed them there was no food.  My Dad helped me through it all because I was pretty upset by this time; about the baby, about what the kids had talked about, the whole feeling in that house. I didn’t want to be there when the parents came back.

The man and woman from Social Services took over and stayed with the kids and I left to go home with Dad. The next day the house was empty.  No truck in the driveway, no kids in the yard.  Even the dog was gone.

Years later when I was working in the Criminal Justice System, I came across their last name on a court docket list.  I didn’t go in the courtroom.  I didn’t want to see.