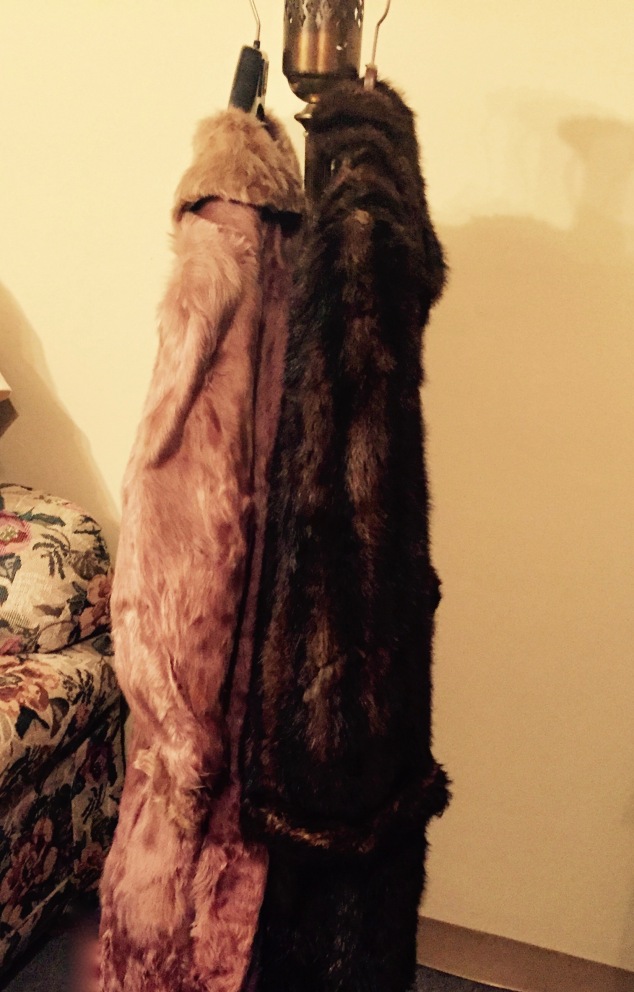 I flicked the light on at the top of the stairs and got about two steps down towards the basement before I yelled “the basement is flooded!”.  And just to be sure I ran down and stood on the bottom step looking at stuff floating around in 5 inches of water.

It happens.  Sump pumps fail. But I had just finished cosmetic renos, fresh paint, new moldings, and I was heading down to hook up the last new light fixture.  My shrieks brought Mark down to have a look, say some choice words and  head out to get a pump and get the water out of there.

By the evening, I was sucking up water with my carpet cleaner and turning couches on end to dry, moving soggy stuff around, feeling relieved that books didn’t get damaged when I remembered the wardrobe in the storage room with my fur coats in it.

I’ve hauled these coats around for decades.  Worn them a few times for “dress up” as a hippie and a flapper girl, but mostly just keep them in the fabric bag with mothballs tucked away in the wardrobe.

The pinkish one belonged to my Grandma and I have a picture of her wearing the coat on an outing with me when I was six years old. My grandparents raised white-faced Herefords, and I remember asking Grandma if it was a cow coat because it was almost the same colour as the cows.  I got a “hush Susie” out of that one. Never really got an answer but I did find out later it was dyed muskrat which wasn’t nearly as much fun as a Hereford hide coat in my opinion.

The classic muskrat (mushrat, as I thought it was for years) belonged to my Great-Aunt  Bertha and I can’t remember how I ended up with it.

The cardboard wardrobe box sucked up water like a wick and I had to heft and haul the coats out.  They also sucked up water about six inches high on the hems and were dripping as I laid them out on the floor. I was devastated and took to them with towels and drying heaters.

The thing is, the coats aren’t worth anything; Ebay can confirm the plethora of old or vintage as we like to call them muskrat coats for sale. I told Mark that I thought it was time for me to end my relationship with the coats, but I knew I didn’t mean it as I brush the fur back into softness. Not yet.

So why do I hold on to these things that have no money value and take up space, that aren’t even cool to wear if I wanted to?  I think it’s because they were so special to the ladies who wore them.  It isn’t like buying myself a coat. I’m pretty sure the coats were cherished gifts from my Grandpa and Uncle Ralph respectively. That’s how it was done fifty or sixty years ago, and I think that’s special.

It’s weird the material things we focus on in fire, flood and trauma type events but it’s because these material things have a connection that soothes our hearts.  Even if they smell like wet dogs.